— by Jennifer and Stanley

Jostled but warm
inside your purple coat

Next to my heart
where no wind blows
still sandy

Safe from the bonfire
those marshmallows blackened
and burst so fast! 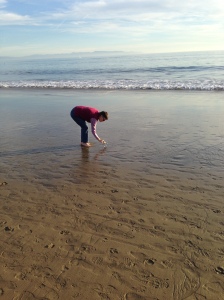 Stanley puts his feet in the ocean!

Well, I’ve finally caved in to my (ridiculously busy) life and abandoned the “new poetry prompt on Thursday” problem. New prompts will still appear, but now they’ll appear on Saturdays. Here is the first prompt-on-Saturday. Today we are going to write rengay!

I’m not an experienced rengay poet. I love short forms (as you’ll recall from previous posts) but I’m not an expert. I have however used this form to teach before, as some kids find it wonderful to write together — it gives them a break for staring at the page alone. I hope today’s rengay prompt will get me writing something new as well as encourage you. Fortunately, there is a lot of information out there about this form, which we can all learn from.

Here’s what Michael Dylan Welch has to say: “The rengay is a collaborative six-verse linked thematic poem written by two or three poets using alternating three-line and two-line haiku or haiku-like stanzas in a regular pattern. The pattern for two people is A-3, B-2, A-3, B-3, A-2, B-3, with the letters representing the poets, and the numbers indicating the number of lines in each given verse. For three people the pattern is A-3, B-2, C-3, A-2, B-3, C-2. Unlike renku, […] a rengay stay[s] in one season and develop[s] a single theme. Since they are brief, rengay are also more easily remembered than renku, and more likely to be published in the various haiku journals. […] Rengay was first publicly introduced at the November 1, 1992 meeting of the Haiku Poets of Northern California in San Francisco.”

Rengay is a recently invented form, similar to renga, also a collaborative form of poetry from Japan. Rengay is also related to renku, a longer collaborative Japanese form.

Because rengay are long-ish, I won’t reproduce any here. Frongpond (the Journal of the Haiku Society of America) offers this sample.

I am planning to write a rengay today with my daughter. She’s agreed to collaborate with me. We are doing this in part to complete a visit of Flat Stanley to our house. I want to write a poem together with Stanley, but he’s mute on the idea. So, Stella will help and channel Stanley’s poetry onto the page.

The resulting poem will also be posted on here and on Tumblr.

Have fun with your rengay and a friend. Please let me know how it goes.