This was my first year at the annual San Jose Poetry Festival. It was a busy day, well attended, with many local poets, coming from Santa Cruz to Berkeley to join in the fun. I’m grateful to Pushpa MacFarlane for getting me involved, but the biggest kudos go to David Eisbach, who produced this year’s event.

It was also my first time visiting the (Le Petit) Trianon Theatre in downtown San Jose. A GREAT venue.

I missed the morning, so I missed my friends Erica Goss (and her metaphor workshop) and Renee Schell (and her poetry and music reading). I’m sure they were swell.

I enjoyed reading my work with two other fine poets, new to me, during one of the featured readings held after lunch. (The only problem was missing the other sessions in which other awesome featured readers read.) Here I am with Harry Lafnear (who read some wonderful poetry about animals, sweet and not at all sentimental) and David Sullivan (who gave a lecture later on the poetry of war). I wouldn’t have been able to make the mic work without them, and I enjoyed our camaraderie immensely.

For some better photos of us, read this really friendly and fantastic write up of the day by Cupertino’s own Crystal Tai for Cupertino Patch.

After my joint reading with Harry and David, I slipped upstairs for the poetry slam portion of the afternoon. I have to confess, right now, that this was my first ever slam. The slam was hosted by Dennis Norren and MC’d by Scoripana X. It’s hard to describe how much fun this was. The format is very smart: judges picked on the spot from the audience, poets reciting their poems and following all kinds of rules (no hand gestures — or was it no props? and time limits and when your phone isn’t a prop and when it is…). Then the judging, which tends to “creep” as the slam goes on, so the scores get higher and that’s why the poets have to read in a randomly chosen order — any way, it was so much fun. Very much an audience participation event. I was amazed by the artistry, the passion, the voices! I didn’t catch everybody’s name, but you’ll recognize Kim Johnson, a past featured reader on Chaos Never Dies Day and winner of the Silicon Valley Reads 2014 poetry contest.

After the slam, I was energized enough to stay for another event. Pushpa MacFarlane created a truly wonderful reading, inviting poets from all over the world and the bay area to read what she very smartly called “World Poetry” — perfectly in keeping with my theme for National Poetry Month, these were poems written about what it means to be from all over the world. The poems were in most cases read in English either after or before being read in the language they were written in: Spanish, Mandarin, Persian/Farsi, Japanese, German, Hindi, Portuguese, Vietnamese, Native American (by Joy Harjo) and Maori. What a splendid music.

Crystal Tai reading her own poems in Mandarin and English 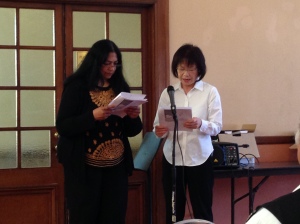 Okay. That’s about all I’ve got. Again, I’m so grateful to have been part of this lovely day. I hope it’s repeated next year.